Diet and eye health are directly linked, and it goes way beyond the beta-carotene—which your body turns into vitamin A—that’s famously plentiful in carrots. 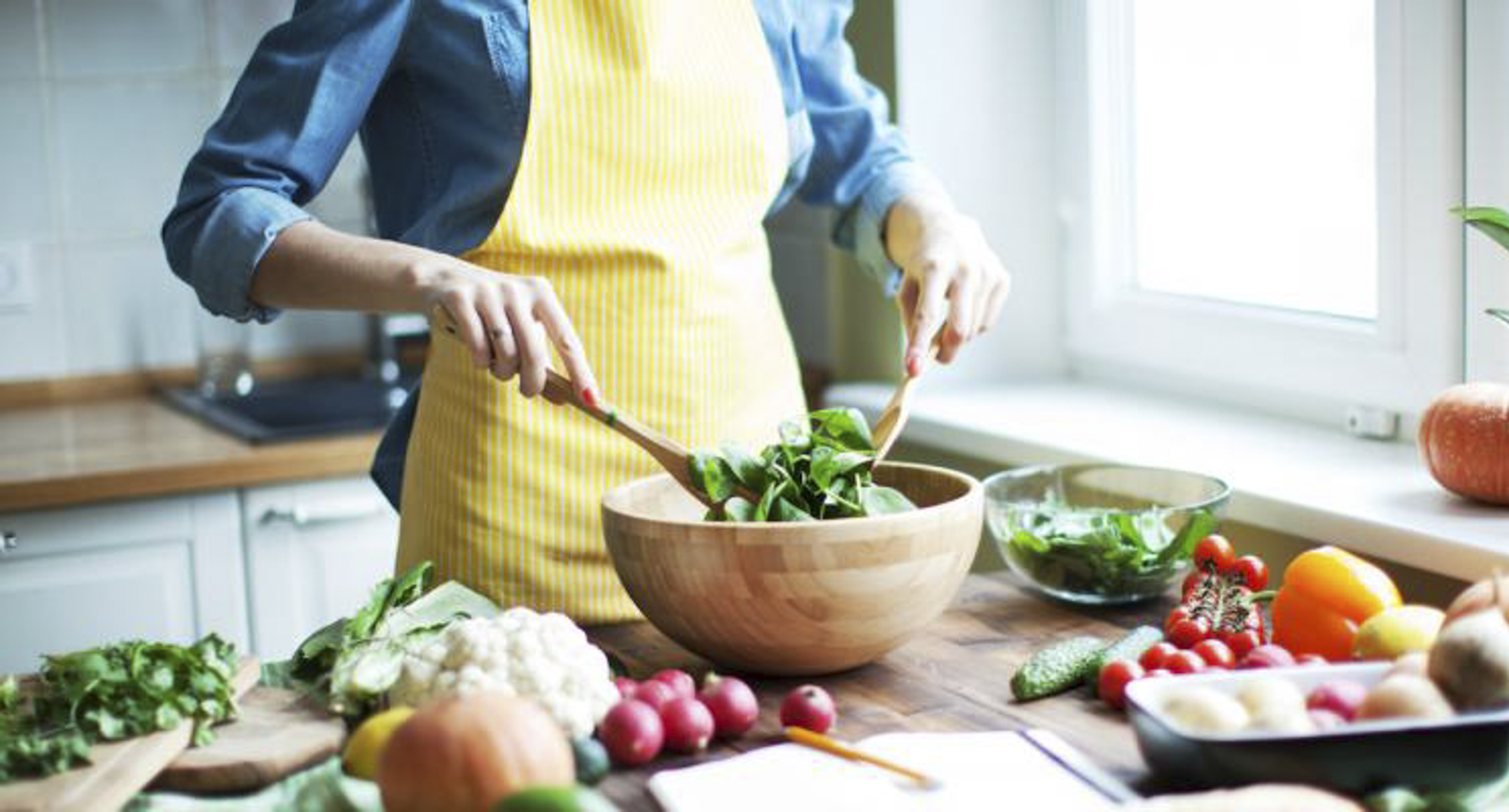 Better vision begins in the kitchen. Put these helpful foods for eyes on your plate today.

“Eat your salmon—it’s good for eye health,” your mom never told you.

She should have. Diet and eye health are directly linked, and it goes way beyond the beta-carotene—which your body turns into vitamin A—that’s famously plentiful in carrots.

It’s all about inflammation, says Sonya Angelone, R.D., a San Francisco–based dietitian who specializes in inflammatory conditions. (Angelone is also a spokesperson for the Academy of Nutrition and Dietetics.)

A quick refresher: Inflammation is part of your body’s normal self-defense against foreign invaders. Whether it’s the flu virus or sugar molecules from a glazed doughnut, too much bad stuff in your body kicks your immune system into overdrive. Chronic low-grade inflammation, as it’s known medically, takes a toll on your heart, joints, and other organs. It’s also bad for your eyes.

Taming inflammation can help prevent eye diseases like age-related macular degeneration (AMD), glaucoma, and cataracts, says Angelone. And don’t brush it off because you’re still young: Nearly 10 million Americans show early signs of AMD, and a growing number of people younger than 65 are having cataract surgery, according to the American Optometric Association and the American Academy of Ophthalmology.

“It’s not just what you’re eating,” Angelone says, “but also what you’re not eating.” To save your sight for the long term, she has three simple food rules to remember:

2) Eat your greens—and your blues, reds, and yellows. Why? That way, you’ll get the full force of the disease-fighting nutrients in fresh produce.

3) Rein in the processed junk food and animal fat. Why? Because they’re main contributors to chronic inflammation.

Sounds simple enough. Now here’s how to put that advice into action during your weekly grocery run.

Angelone says that two servings of cold-water fish per week is a good target. She’s partial to salmon. But trout, tuna, mackerel, anchovies, and sardines are other good choices that are loaded with omega-3 fatty acids and vitamin D—two standout nutrients to fight inflammation.

Let’s unpack omega-3 fatty acids first. They are unsaturated fats, popular for heart-smart diets. For your eyes, they help the retina function better by adjusting the fluid balance and thickness of the retina’s outer membrane. Angelone gives a particular shout-out to the fatty acid EPA (eicosapentaenoic acid)for increasing anti-inflammatory compounds in the body.

One of EPA’s jobs is to bring your body back to its preinvasion state, according to 2014 research reported in the journal Investigative Ophthalmology & Visual Science. That helps protect against AMD, which can make it seem like you’re looking through a raindrop and, if left untreated, can even lead to vision loss.

Another reason to serve up cold-water fish: vitamin D, a key anti-inflammatory that prevents the protein deposits that AMD needs to grow and spread. Researchers at the University at Buffalo found that meeting your daily D quota may help ward off macular degeneration.

One 3-ounce serving of cooked salmon has 447 international units (IU) of D, which brings you pretty close the recommended daily dose. Most adults up to age 70 need 600 IUs a day; those older than 70 need 800 IUs. Talk with your doctor about checking your vitamin D level to figure out your daily target.

Another great way to take care of your eyes is to get them checked regularly. Book your next exam today!

All dark-green leafy vegetables are good for your eyes, says Angelone, but kale is highest in lutein and zeaxanthin. These two powerful antioxidants tend to move toward the back of your eye, in the macular (or central vision) part of the retina. They act as a kind of internal sunblock, absorbing blue light from the sun and the screens on your tech gear, lowering your odds of developing cataracts or AMD as you get older.

Depending on the type of kale, you’ll get 20 to 26 milligrams per one-cup serving. That’s plenty, considering it takes just 7 milligrams a day to decrease your risk of AMD and cataracts, according to findings from both the landmark Nurses’ Health Study and the Health Professionals Follow-Up Study.

If you’re turned off by kale’s bitterness, try roasting it: Toss two bunches of chopped kale with 2 tablespoons of extra-virgin olive oil, 2 garlic cloves (chopped), ½ teaspoon of sea salt, and ¼ teaspoon of ground black pepper; spread it on a rimmed baking sheet; bake at 375 F until the leaves are slightly browned and crisp on the edges, about 15 to 20 minutes, stirring every 5 minutes.

Ever wonder why EVOO winds up on so many dietitians’ “best foods” lists, or why it’s called a “healthy fat”? It’s because EVOO is exceptional at keeping inflammation in check, says Angelone. In other words, pour liberally!

This bread basket staple is an unsaturated fat packed with polyphenols and vitamin E, two types of disease-fighting antioxidants that act like a sponge. Once in your system, they soak up the bad effects of environmental pollutants, lack of sleep, poor exercise habits, and other damage that slowly chips away at healthy vision.

Besides tossing salads with EVOO, you can use it to flavor corn on the cob, drizzle it onto your sandwich bread, or use it to make hummus dip or pesto.

It’s hard to find fault with any fruit, but when it comes to safeguarding your eye health, berries rise to the top because of their deep red and purple hues. “The more colorful the fruit, the better it will be at fighting inflammation,” says Angelone.

And for that you can thank anthocyanin—the antioxidant that gives berries their vibrant tones.

Angelone says she’s a particularly big fan of blueberries because they’re available year-round—and they have higher antioxidant levels than other popular fruits, but only modest amounts of sugar. Not bad for something that’s the size of your thumbnail.

And the sugar that does exist in blueberries is natural, not added. This is an important distinction: Sugar that’s meant to be there is healthier, Angelone says. Berries have about 15 grams of natural sugar per 1 cup serving.

On the other hand, added sugar—which is pulled from its original source and added to another food solely to tease your taste buds—is most definitely linked to inflammation. “Over time, too much added sugar kicks your immune system into overdrive,” she explains. “That’s when inflammation becomes a concern for your eyes.”

Beans make the cut because of one key ingredient: zinc. That’s a crucial anti-inflammatory nutrient with the important job of tapping the brakes in the immune system, says Angelone.

Remember how the immune system goes into high alert when you come down with a cold or cut your finger? Zinc’s the key compound that gives the A-OK when the body heals and returns to normal operations.

But zinc has a few more tricks up its sleeve. It neutralizes the harmful free radicals that start roaming around when we indulge in a glazed doughnut, skip a workout, or feel stressed. “Without enough zinc,” says Angelone, “you’re more exposed to the effects of chronic-inflammation.”

According to the National Institutes of Health, about 25 percent of otherwise healthy older adults in the United States are low on zinc. That translates to a higher risk of AMD. Fortunately, it’s never too late to shore up your zinc stores. Those with advanced AMD who took zinc supplements saw a 21 percent improvement in their symptoms, according to the AREDS study.

It’s fairly easy to hit your daily zinc requirements. One cup of black beans delivers 7 milligrams, which is about 75 percent of your daily goal. White beans have 1.9 milligrams; garbanzo beans (aka chickpeas) and lentils each have 2.5 milligrams per cooked cup.